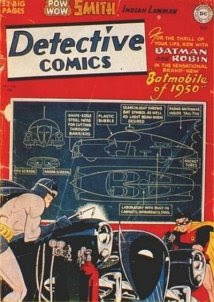 Issue: Detective Comics #156
Cover Date: February 1950
Writer: Joe Samachson
Penciller and Cover Artist: Dick Sprang
Inker: Stan Kaye
Synopsis: While attending a party, Bruce Wayne sees a group of criminals leaving a nearby mansion. Volunteering to be part of a magician's disappearing act, Bruce escapes from the party (and his boring date) via the cabinet's false back. After changing into Batman, Bruce contacts Dick and tells him to change into Robin and bring the Batmobile to his location. Batman and Robin pursue the criminals, only to plumet to the river below after a bridge they're driving on is destroyed by dynamite planted by the crooks. Robin makes it through without a scratch, but the Batmobile is totalled and Batman's left leg is injured, confining him to crutches.
Batman isn't fazed by the news of the Batmobile, as he has been planning to build a new, more advanced Batmobile. While the underworld laughs at Batman's injury, Robin begins building the new Batmobile from Batman's plans while Batman directs him from a chair (he is injured after all). One night after an unsuccessful attempt at solo crimefighting, Robin returns to find the Batmobile finished and ready to roll. Batman and Robin get right to work, driving to the crime scene from earlier that night and obtaining a map left behind.
Using the miniature crime lab in the back of the Batmobile, Robin locates the gang's hideout and sneaks into it when he and Batman arrive. Batman is able to see what Robin sees via a televison camera on his chest. Robin gets surrounded and Batman bursts through the wall to rescue him, allowing the criminals a head start. They try to evade Batman and Robin through the same bridge trap, but the "rocket tubes" on the new Batmobile allow the Dynamic Duo to evade the gap in the bridge. Batman and Robin continue their pursuit and take an alternate route to get ahead of the criminal gang. They create a smokescreen and underneath it knock out the gang and bring them in. The story ends with the revelation that Batman had been able to walk for a few days now, but kept playing invaild to see if the Batmobile would be able fill in for him if needed.
Thoughts: As this story is from the beginning of the fifties, it does not feature the aliens and strange happenings that would become trademark of the fifties era Batman. A huge leap in logic needs to be taken however when it comes to the first bridge sequence. From the height they fell and their lack of superpowers, Batman and Robin probably shouldn't have survived the fall, with Robin hitting the water and Batman hitting dry land in the Batmobile. Suspending disbelief, the story is a lot of fun and a good introduction to the 1950's Batmobile.
The revelation that Batman has been secretly back to full health is all the funnier when combined with the title page at the beginning of the story. One panel shows the criminals laughing at newstories of the Caped Crusader's bum leg, while the opposite panel sees Batman reading the newspaper and chuckling to himself while Robin works on the Batmobile. One thinks that Batman must have been kicking back and chuckling to himself, secretly able to lend a hand, while Robin worked at building the Batmobile.
The best sequence of the story is probably the one where Robin attempts to apprehend the criminals on his own. First there's the panel where Robin is beaten back by a bag of flour one of the crooks had brought along in anticipation of Robin making an appearance. Then there's the scene where Robin attempts to pursue the criminals in a pitiful Jalopy with a flag declaring "My Kingdom For A Horse!", all the while getting laughed at by the people on the sidewalk. You have to feel sorry for the Boy Wonder, caught off guard by a bag of flour and forced to endure everyone's laughter due to his temporary transportation. We see a number of the new Batmobile's features in the story, from the miniature crime lab to the miniature video camera and televison to the miniature Bat Signal. Compact was the name of the crime fighting game in 1950, with the Batmobile being converted into pretty much a miniature Bat Cave on wheels.
Dick Sprang provides some classic Golden Age artwork, from the grinning faces of gloating gangsters to the design of the new Batmobile itself, investigation to action scenes, his art is solid. An interesting Easter Egg is that in the panel where Dick gets the call from Batman, he's reading an issue of Action Comics. The only minor quibble I have with the art are the one panel side views of Bruce and Dick. While distinctly Sprang, they just don't look quite right.
This story has been reprinted in the Batman In The Fifties TPB and in DC 100 Page Super Spectacular DC-14.
Posted by Chris at 5:06 PM

I love Sprang's art in spite of his unfortunate name. I've told this story on the Net before but my wife and I were priviliged to be at an interesting event about 18 years ago at a ChicagoCon. We were having breakfast in the hotel restaurant at a table next to Mr. Sprang. On the other side of us sat DC's then-publisher Jeanette Kahn. As we eavesdropped, the bearded Mr. Sprang slowly stood and crossed to the other table, politely introducing himself. It's my recollection that Ms. Kahn and her party were properly worshipful.

A most enjoyable bat-blog, btw!

Ha! Great story. I never had the opportunity to meet Sprang as I didn't become aware of his art until after he passed away. Among the Golden Age Batman artists, he is definitely my favorite. Thank you for the kind words about the blog, I'm having a blast doing it.

Go to http://services.nexodyne.com/email/ to generate your own e-mail button.

Comic Book Sites Worth Your Time